We call what we do Rapid Software Testing.

Above all, we test because it is the responsible thing to do. We have a duty of care toward our teams, our organizations, our customers, and society itself. Releasing poorly tested software would be a breach of that duty.

Rapid Software Testing (RST) is all about that. It is a responsible approach to software testing, centered around people who do testing and people who need it done. It is a methodology (in the sense of “a system of methods”) that embraces tools (aka “automation”) but emphasizes the role of skilled technical personnel who guide and drive the process.

The essence of this methodology lies in its humanism (we foster responsibility and resilience by putting the methodology under the control of each practitioner), its ontology (how we organize and define the various priorities, ideas, activities, and other elements of testing), and its heuristics (fallible methods of solving a problem). In RST, we’re not afraid of learning, applying, and discussing words like “ontology” or “heuristics”. For us, words are important tools we use to help us develop our expertise and to describe and explain our work.

Rather than being a set of templates and rules, RST is a mindset and a skill set. It is a way to understand testing; it is a set of things a tester knows how to do; and it includes approaches to effective leadership in testing.

What We Mean By Rapid

Here’s a roadmap of many of the elements of RST: 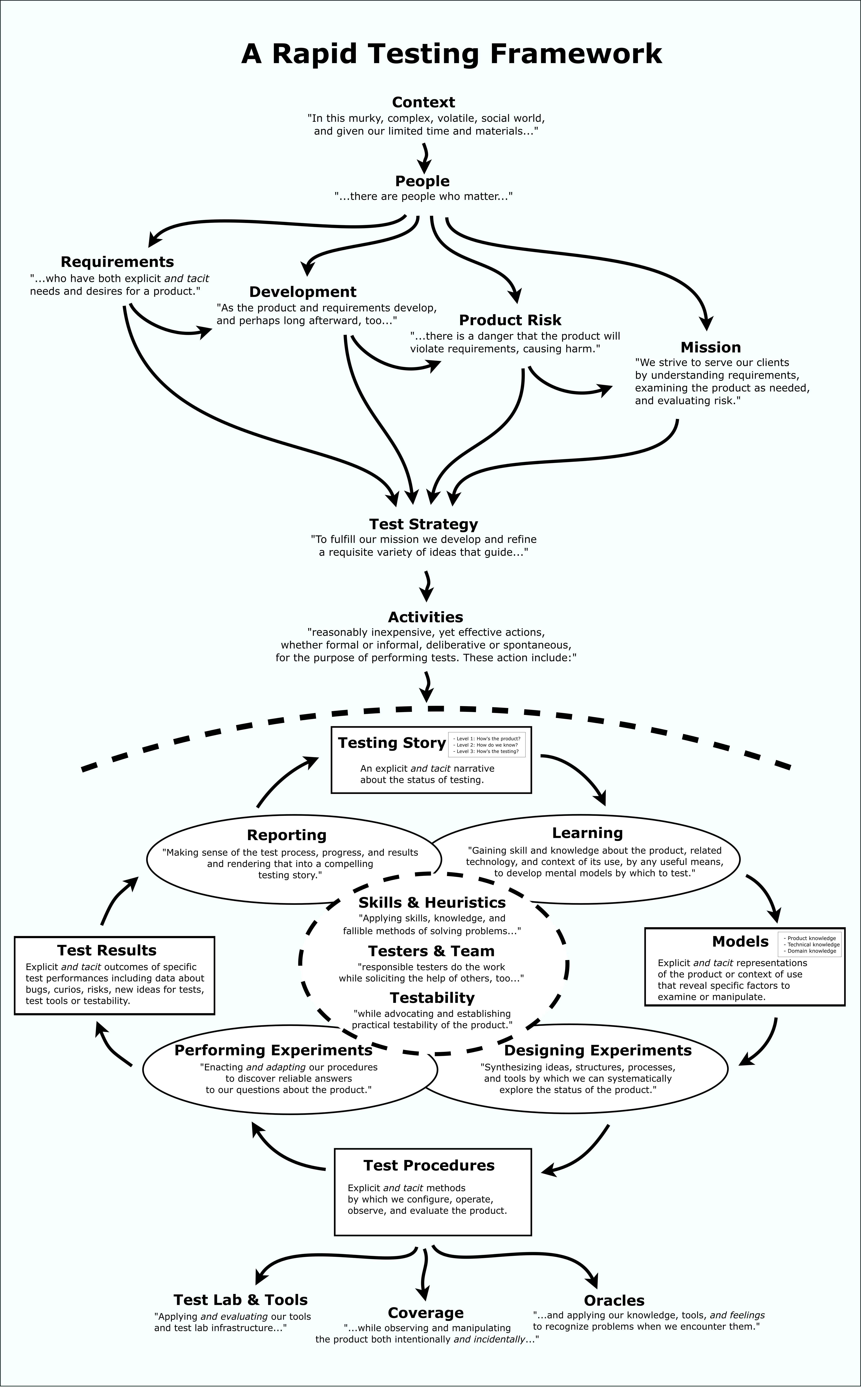 Some of the reference documents that express RST can be found here.

What Are the Foundations of RST?

RST is strongly influenced by the approach to engineering and science promoted in the works of Gerald M. Weinberg, Cem Kaner, and Billy Vaughan Koen, as well as sociologist Harry Collins, family therapist Virginia Satir, and Nobel laureates Herbert Simon, Richard Feynman, and Daniel Kahneman. If you admire their work, you will find much that resonates in the methodology and classroom experiences that we provide.

RST is also based on and related to Lessons Learned in Software Testing: A Context-Driven Approach, by Cem Kaner, James Bach, and Bret Pettichord. as well as the self-education and independent thinking approach to life depicted in James’ book, Secrets of a Buccaneer-Scholar.

Below are the specific premises of the RST, writing by James Bach and Michael Bolton. Everything in the methodology derives in some way from this foundation. These premises come from our experience, study, and discussions over a period of decades.

The Evolution of RST

The genesis of Rapid Software Testing was in James Bach’s experiences running testing teams at Apple Computer and Borland International, going back to 1987. He was looking for the essence of testing, and not finding it in any of the standards or books of the time. Then he received important clues from the work of Ed Yourdon, Tom DeMarco, Tim Lister, and Jerry Weinberg. They pushed him to consider general systems thinking, and opened his mind to the key role of psychology in engineering. Then in the mid-90’s, during an all-night conversation at a testing conference in San Francisco, Cem Kaner urged him to explore cognitive psychology and epistemology. These fields provided the organizing framework of James’ emerging methodology.

The first talk James ever gave about his approach to testing was called something like Dynamic Software Quality Assurance, for Apple University in 1990. He was talking about heuristics and systems thinking but though perhaps not in those words.

The first major conference talk James gave was called The Persistence of Ad Hoc Testing, in 1993. He was talking about the extraordinary value of exploratory testing, although he would not start using that term until later in the year.

The first public version of James’ testing methodology was embodied in a class called Market-Driven Software Testing, in 1995. He then created a class on risk-based testing, as well as the industry’s first exploratory testing class. In 2001, he combined these classes and began to formalize the methodology, renaming the class to Rapid Software Testing.

In 2004, Michael Bolton brought his experience as a developer, tester, documenter, and program manager to the class, adding new exercises, puzzles, and themes. Michael’s work in commercial and financial services software added and influenced ideas on the role of formality and documentation, and in 2006 he became a co-author of the class and the methodology. Over the years, he helped to refine RST, sharpening the vocabulary, and introducing the crucial distinction between checking—a part of testing that can in principle be done by machinery—and testing—which requires both the explicit and tacit knowledge of the tester.

Paul Holland (from embedded systems and telecommunications), Huib Schoots (financial services), and Griffin Jones (medical devices and other regulated domains) each brought their ideas, experiences, and teaching styles into the mix. Each one of our instructors benefits from the work of the others, and each teaches his own personal variant of RST.

RST historically was focused on testing and testers. But we have recently refocused it a little because a lot of people who do testing are either not called testers or do other things besides testing. Our clients, these days, need to know how RST integrates with Agile and DevOps

Here is our Agile Rapid Testing Grid which helps us explain that:

What the Methodology Is Compatible With

RST is a context-driven methodology. This means the our classes are not specifically about testing in an Agile, DevOps, Lean, Waterfall, or regulated context; nor does it incorporate any specific testing tool you might use to simulate users or support any other aspect of testing. But we do help you apply these things in testing by putting you in control of the process, so that you solve the problems that actually exist in your context.

Applying some practice such as “unit testing” or “behavior-driven development” responsibly means choosing it when it fits your context, and not because you heard that Facebook and Google do it, or because you are ordered to do it.

Using automation responsibly includes considering approaches outside of automation when they are more effective, more efficient, or when they address problems that automation ignores.

Responsibility means that when you say “probably nothing will go badly wrong” you are not just guessing.

RST does not tell you what to do. It is instead a framework for responsible and literate consideration of what to do. The instructors of RST have experience with a wide range of contexts, and can help you customize the material to fit your needs. So, we have lots of ideas for how to apply automation to testing, or how to test well in a documentation-heavy project.

There is one thing in particular that RST methodology is not compatible with: fake testing. Yes, there are some organizations that maximize paperwork on purpose and encourage shallow test scripts that they know rarely find bugs. “Factory-style” testing often amounts to fake testing, because it looks reasonable on its face, despite failing to achieve its apparent purpose. Some companies—large testing outsourcing companies are famous for this—even do that is a business model to maximize billable hours. Such companies don’t want to test more efficiently, because that would reduce their billable hours. They want to look productive to people who don’t understand deep testing. If you work for such a company, your boss will be very annoyed with you if you attend an RST class. It will cause you to ask uncomfortable questions.

Here are some additional details about how RST compares to some other popular methodologies of testing out there.

That’s a start. There’s much more to learn about RST.
RST for YourselfRST for your TeamRST for Leadership

RST for Your Team